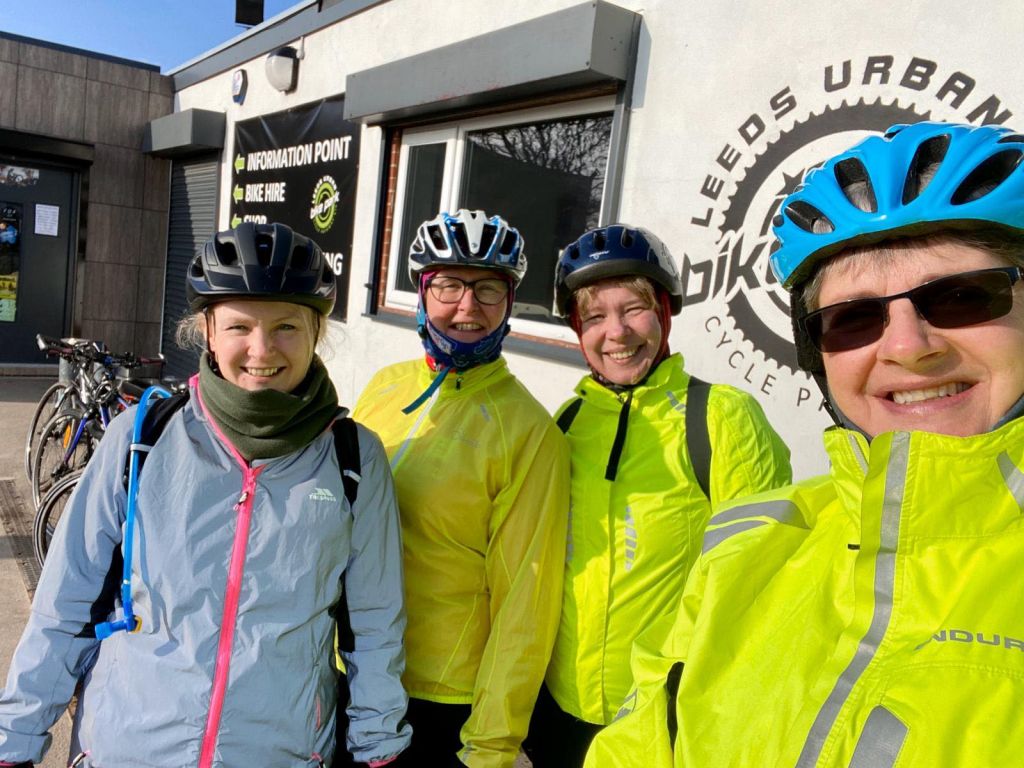 Being a single extrovert I find myself having a lot of ‘spur of the moment’ events to keep me occupied. One such moment was on seeing a Facebook advert for a Let’s Ride event. Not owning a bicycle and being without glasses that  week meant that this was not the perfect moment but my interest was peaked. At this point I hadn’t ridden a bike for 22 years and the thought of cycling on the road petrified me. With further research the Breeze sessions at the Brownlee Centre in Leeds drew my attention – no roads, and only one mile round the track. There was still the small issue of no bike but luckily for me my then heavily pregnant daughter wasn’t using her bike and so I asked if I could borrow it. She readily agreed but I very nearly backed out when I tried getting on it the first time because the saddle was way too high for me and it wouldn’t go down as far as I would’ve liked. My daughter and my son-in-law practically forced me to take it and I’ll be forever grateful for that first metaphorical push. 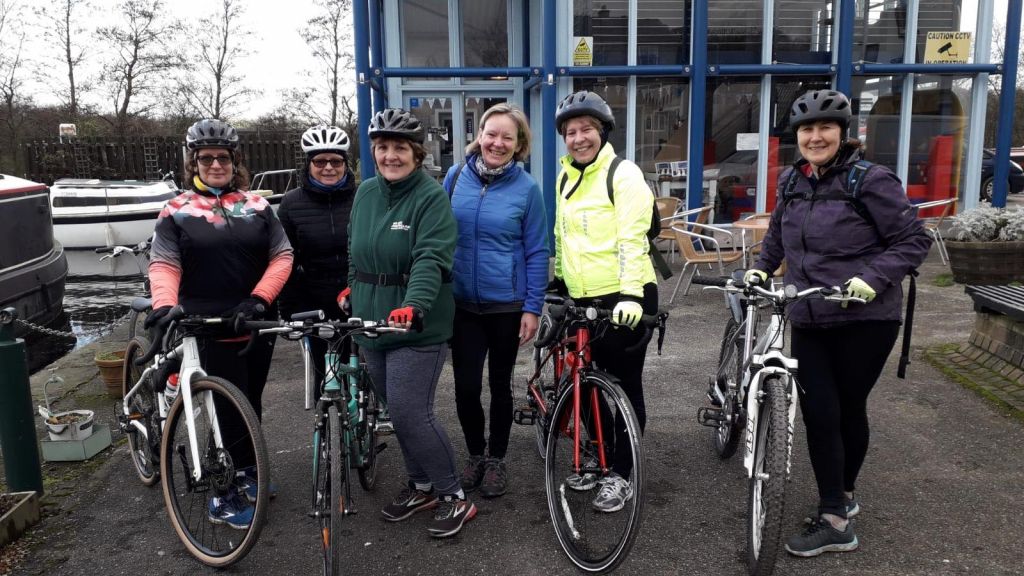 My first Breeze session was on a hot August evening in 2019, I was nervous and late. I expected to be turned away because I was late. Instead I was welcomed and introduced to the fabulous Carrine Green who quite literally took me off to the ‘nursery slopes’ and re-taught me all the basics like how to brake safely, and riding with only one hand on the handlebars whilst the other hand was signalling my intent to manoeuvre. The size of the bike was still an issue but Carrine instilled enough confidence in me to agree to try riding round the track before the session finished for the evening. The lovely Janet Ballance took me under her wing for that part of the adventure. Before arriving at the Centre in my head the track was a mile long and flat. It’s not. It’s a mile long, with quite a steep hill and some flat. It has cut throughs at appropriate points so that you can miss out the hill or concentrate on getting up some speed on the flat. Everyone goes at their own pace. I left that night buzzing.

I was eagerly back the next week and achieved 7 laps (7 miles) in the hour that the session lasts for. I came off the track with very wobbly legs, heavy breathing and a huge sense of pride. I was hooked. 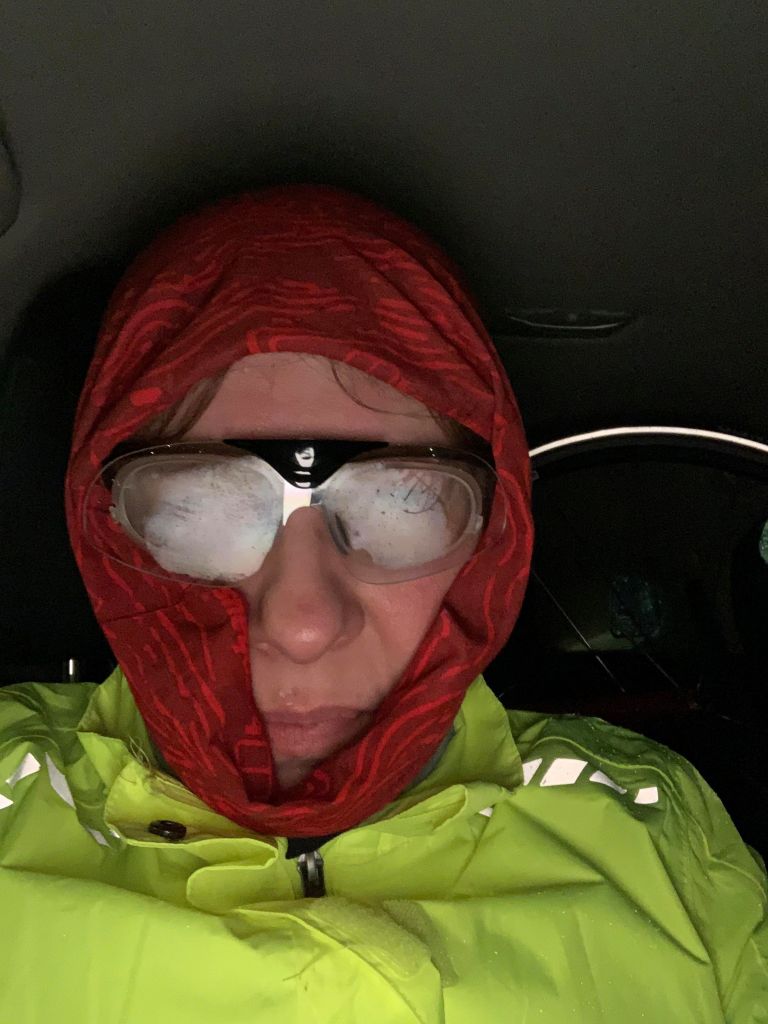 Fast forward to the winter of 2019, I turned up every week even when the rain was bouncing off the track. It’s an all weather track and so water tends not to pool on it. This is a woman who previously would find an excuse not to go to the gym if it was raining and here I was now cycling 11 miles in the hour, going home with a soggy bottom because my borrowed bike had no mudguards and wishing that the session was much longer than an hour. The first time a session was cancelled because it was too windy I was devastated. 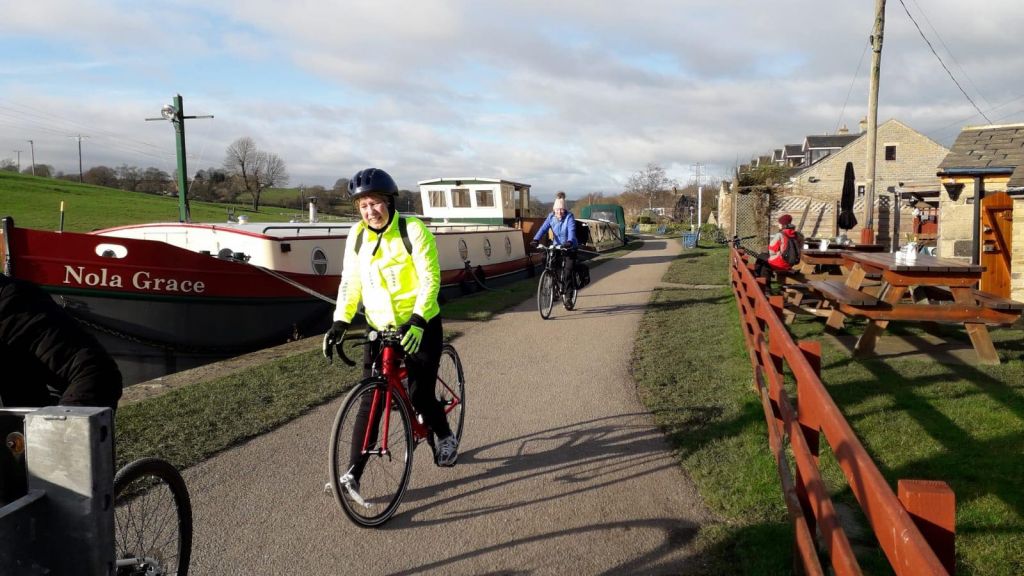 I’d planned to only ever ride on the track but by January 2020 that wasn’t enough and I started joining some of the guided rides. I’d also invested in my own bike through the Cycle to Work scheme. No more riding on a bike that was too big for me.  I was still terrified of riding on the road and drove my bike in the car to and from the start of the rides so that I only had to ride on the roads with others who knew what they were doing. Most of the rides I did at this time were down the canal path which is a lot less stressful than riding on the road and gives you an opportunity to chat to some of the other fabulous women that go along. I’d planned on the exercise, making new friends was a bonus.

Then COVID-19 hit the UK and like every other sporting activity the Breeze Rides were suspended I was beside myself. Where was I going to get my exercise from now? Where I live in North Leeds is bound by just about every single major road in the area and there was no way that I was going to ride by myself on them. However, ‘determined’ is my middle name and so I devised myself a route that I could take every morning before work that would take me on side roads only and through Roundhay Park. The fact that there was virtually no traffic at this point was what spurred me on. I was particularly scared of turning right and for the first few weeks avoided doing that like the plague. Then I reminded myself that I’d given birth three times so if I could do that turning right ought to be only mind over matter! I changed my route so that every turn was to the right!

There are A LOT of hills in West Yorkshire including in the middle of Roundhay Park but I discovered on my first attempt that if I took my time and pushed myself I could get all the way up the hill without having to get off and push my bike. I thrive on a sense of achievement and by early May 2020 I was cycling 7 miles every morning before work and notching up about 50 miles a week. I’d discovered cycle paths that took me safely across the city at the weekends and the mental health benefits during the height of the COVID crises were significant. In June 2020 I completed the Cycle for Dementia challenge and raised £135 for Alzheimer’s UK in the process.

I’ve now reached a point where I’m tackling some busier roads by myself and now that the traffic volume is returning to it’s norm I’m learning to cope with that too. I find that most motorists are respectful of cyclists and I’ve definitely become a better motorist as a consequence of my cycling journey. My adult son and I have discovered that cycling together is a way that he and I can have quality time together. I’m still really nervous about riding on major roads and haven’t yet built up the confidence to tackle them by myself but now that some Breeze guided rides have started up again I am booking myself onto rides that involve cycling down very busy roads so that I have the comfort of knowing that I’m riding with others who will do their best to keep me safe and lookout for me. On my last guided ride out it turned out I was the only one who knew the route and so I willingly shared what I’d learned whilst challenging myself to just get out there and do it. That’s now my challenge to you. If I can do it so can you and it’s never too late to try. 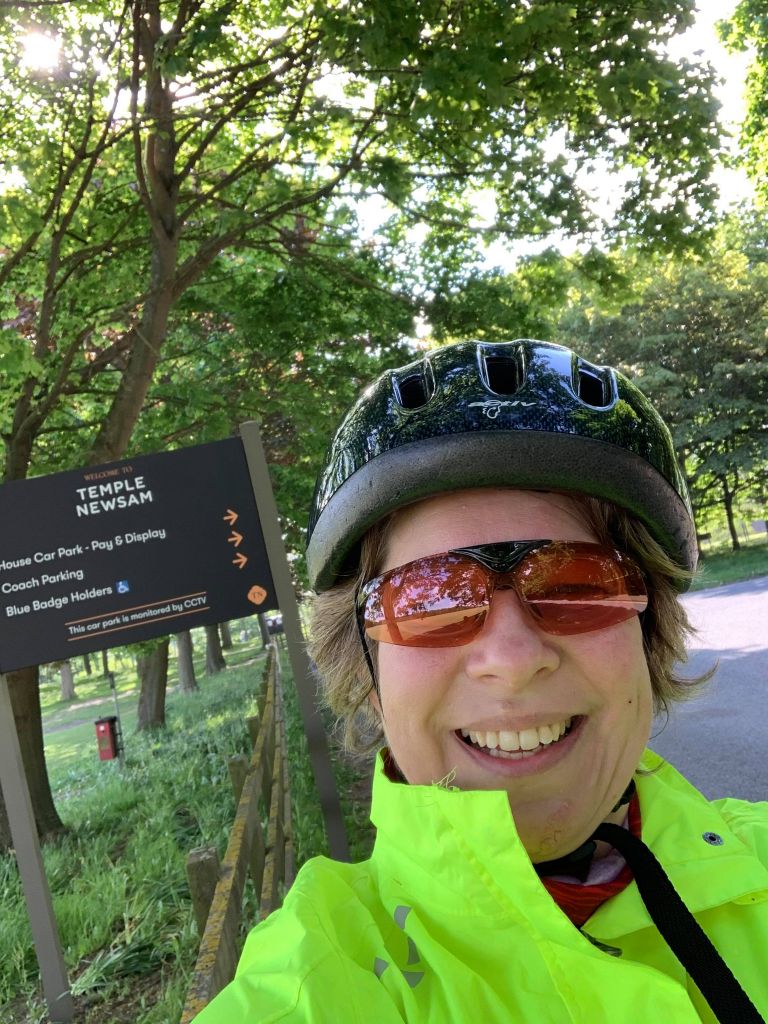