For the final instalment of our #ShareYourRide campaign, we asked three different cycling groups to organise their own Ride Social – but with a creative twist. We armed them with video cameras and asked them to compete for the title of best Ride Social. From a lighthouse escapade to an urban graffiti tour, watch all three rides below...

Bike Dem Crew, an offshoot of the popular Run Dem Crew, is a collective of creative heads with a passion for cycling. Bike Dem Crew share the back streets of East London with us as they go on an urban graffiti tour – showing that, although London can be hectic, exploring the city on two wheels with friends can uncover some lesser known beauty spots.

“Bringing people together is the thing that I like most about riding my bike. Everyone gets to enjoy the journey, it doesn’t matter what type of bike you have, it’s just being able to get on a bike and come with us.”

Endurance cyclist Laura injects a bit of randonneuring into her ride as she takes us on a treasure hunt style adventure around the Kent countryside. Laura created bespoke brevet cards for her friends to check off as they went along their sightseeing ride.

“Over the past few years I've had the chance to meet so many interesting, amazing people through cycling. It's a great way to make new friends and push yourself to reach new goals.”

Perhaps it has something to do with the Wiggins name, but Tim’s ride was no mean feat for his Ride Social buddies; taking on some of the toughest climbs on the Isle of Wight. The group explored nine dead end roads which lead them to the Isle’s various coast guard stations and lighthouses – rewarding with them some stunning views as they raced against daylight.

“The best thing about group riding for me is that I always find I push myself further, whether it’s the distraction, you find the miles pass quicker or because you're just trying to hold on to that wheel and race someone up that next climb!”

So whether your idea of a great ride is a metropolis meet up or a checkpoint challenge, it’s always more fun with friends. Ride Social allows you to organise your own rides or join others near you. It’s completely free and with over 110,000 buddies waiting to share a ride with you, what are you waiting for? Discover more here.
Ride Social 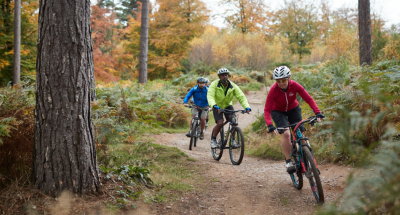 Is this the end of your New Year’s resolutions?